At the Origin of the Almohads

The archaeological site of Igiliz is known to have seen the birth and to have been the shelter of Ibn Tûmert, founder of the Almohad Empire (12th century) which brought down the Almoravid dynasty. The beauty of the Igiliz site (30.399465, -8.365924) located to the southeast of Taroudant is breathtaking.

This fortress rises to 1354 meters above sea level. Today it has become an exciting archaeological site. It is difficult to imagine that in these mountains, a revolt occurred which raised the South of Morocco, to lead, 25 years later, the greatest empire that the medieval Maghreb knew: the Almohade Empire.

The excavation of this exceptional site, which is at once a center of devotion, a place of tribal gathering, an eagle’s nest and refuge of a charismatic community led by a Berber religious leader, has, for the first time, made it possible to restore the history of this rural community in all its components.

The excavation of Îgîlîz has also made it possible to document religious and ritual practices that were little known until then, and to measure the methods of Islamization of the countryside. Finally, the excavations also gave a more global perception of the activities of the devotees, peasants and warriors who inhabited this mountain, through studying the food economy, agro-pastoral practices and the plant environment.

The archaeological site is made up of two areas quite dissimilar from each other.

The eastern summit, which allows access to the site, concentrates the first lines of defense; it shelters a habitat generally rather dispersed, except on the first slopes to the southwest, where a residential district develops. The central summit (altitude: 1350 m), is enclosed in a powerful wall and this is where the main monuments of the site are located: the Grand Mosque and Qasba (a group of buildings formed by two sectors enclosed by walls, comprising dwellings, service rooms, a worship area and a vast residential complex reserved for a small elite likely to have lived in autarky.

To enjoy the ride:

Pack a picnic in your backpack, leave Maguennoun at the heights of the village. On the way up, you will see villages at the bottom of the valley, the vegetation is varied (argan trees, palm trees, prickly pears, euphorbias, thyme and lavender) but little by little the landscape becomes more arid. Igiliz, is located more than 1350m above sea level. At the top, the view is breathtaking!

On the return to Maguennoun, there is the possibility of another 7 kms walk following the oued. At the end of 7 kms, the oued intersects in 2 and you have the P1712 road on your left. 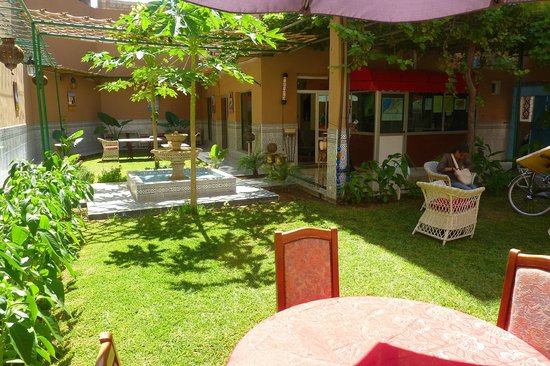